Drinking water is an essential resource for life and with the climate change we are facing in these years it is becoming an increasingly precious asset. This year in particular, the lack of rain and the high temperature are getting challenging the water supply of our country. So, it become crucial minimize the amount of water waisted both in the domestic and industrial environment, but it is even more important to stop the leakage in our distribution system.

It has been established that more than 30% of the water released into the Italian distribution networks is dispersed due to old and inefficient pipes. Modern and maintained pipelines would allow to face the lack of rain and snow, thus avoiding serious damages to the economy.

It will be important for the design of new systems or the modernization of the existing one consider the design guidelines for sealing systems. Exist indeed specific criteria to define the sealing performance of each joint over time depending on the type of seal and the assembly condition.

Let’s start to distinguish the different categories and see the main recommendation for each one.

We can identify 3 main categories based on the working conditions:

Let’s analyse them in detail:

Axial compression: it happens when the seal is compressed between a groove and a cover. The seal has the aim to ensure the sealing between these two surfaces thanks to the deformation of the material. For this application seals with rectangular cross section are often used but also o-ring, when the sealing profile is circular.

In this case there are 4 main condition to consider: 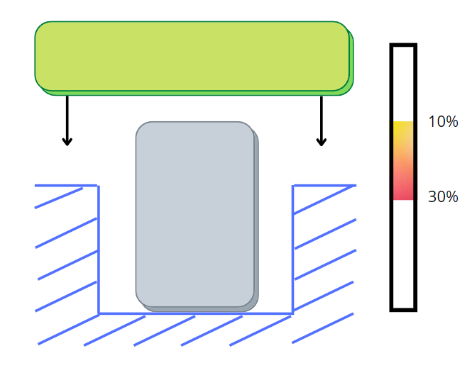 Diametral compression: it happens usually with oring that seal around a shaft. The groove of these seals can be placed directly on the shaft or inside the female component.

Also in this case, as in the first one, the gasket undergoes a compression but this time in the diametral direction. The same condition reported above have to be considered in addition to the following:

Deformation: this represent the most variable situation where due to the geometry of the groove or the assembly conditions is not possible to compress the seal axially or diametral. In this case the cross section of the gasket can have different shape, usually designed specifically for each application.

To verify the proper functionality of the seal in this condition, other than practical assembly and sealing tests, we can use mechanical simulation software. Through this software, the whole assembly can be represented with its boundary conditions, and we can verify how the seal is deformed and how it interact with the sealing surfaces.

But, how to valuate if the final configuration is sufficient or not to ensure the sealing and the stability of the gasket in the groove?

And you, have you ever used these design guidelines on your seals?

Get in touch with us in order to design together your next seal!